Space Walk began in 1959 in New Orleans, LA when John Scurlock, a local engineering professor, constructed the first inflatable amusement ride, at the time called the ‘Space Pillow’. He and his family began manufacturing and selling what many people know today as Bounce Houses, Moonwalks, or Bouncy Castles. 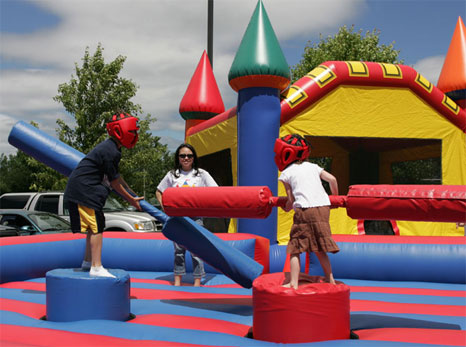 In 1968 John’s wife, Frances, began renting the units out for individual events. Under the leadership of the Scurlocks, their sons, and grandchildren, Space Walk has expanded to over 200 different communities in the United States. With over 4,000 units for rent across the country, we are America’s leader in inflatable fun.

Space Walk is committed to constant improvement in inflatable safety, design, and sustainability. We are proud to partner with American manufacturers to supply our branches with safe, inspected, American-made units. A love of fun inspires Space Walk to innovate creative, thrilling, and exciting inflatables for kids (and adults) of all ages.

All our branches are run as local businesses through Space Walk’s partner program. Our partners are local community members who partner with Space Walk to bring inflatable fun to their surrounding families, schools, churches, corporate partnerships, and non-profits.

Currently operating in Kenner, LA, Space Walk has over 43,000 square feet dedicated to the manufacturing, repair, and storage of inflatable products at our Home Office facilities.

For 55 years Space Walk has been providing fun and safe inflatable rentals, with an emphasis on extraordinary service. Let us deliver the fun for your next event!